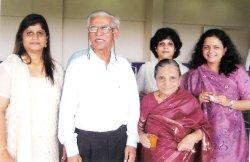 L to R sister Pinky, Dad, Mom, Veena (rear) Bhabhi
RECEIVE LIFE-BANISH DEATH
The Bible is known as the BOOK OF LIFE and very truly it is as it claims... THE BOOK OF LIFE.  Yes Jesus Christ came into this world to give life to the dead world , the world that was dead in their trespasses. What was the trespass that oblivion the world of the life that was offered by the Creator? Their ignorance of the knowledge of the Living God was punished with the severity of being banished from the very presence of God. The sin of disobedience created a wall of enmity between the Creator and the created. The sin of disobedience  committed  by the first man ADAM  along with his spouse EVE resulted in their spiritual death. Instead of adopting an humble attitude and seeking pardon for their rash and an untoward behavior, man refused to be subdued by the loving approaches made by their Creator to get things right between them. Man went to apply solutions


THE NECESSITY
AND VALIDITY
OF
Christian Mission
in a Culturally
DIVERSE Nation.
"The Good news to India"

A thesis submitted in the partial fulfillment of the requirement for the degree of Master of Divinity.

According to the eminent missionary John Wesley, Christian mission is not a human agency but the outreach of the love of Christ. Jesus said, " If you love me, you will keep my commandments "(John 13:34). His command to his followers is to preach the Gospel to the "uttermost" part of the Earth. Paul's missionary zeal was the fruit of his personal devotion to Christ. He declares, " the love of Christ constrains me. "  He was chosen by God and made         " a trustee of the Gospel. "
The most befitting and comprehensive definition of Christian mission is given by Dr. Ralph Winter, director of the United States center for World Mission in Pasadena, California. When confronted by Christians who think that the Bible doesn't really emphasize missions, and that they view it as a sort of afterthought Christ had at the end of His ministry - as if he snapped His fingers at the last minute before His ascension in to  Heaven and said, " Oh, by the way, men, there's just one more thing... " and He spelled out the Great commission, as though virtually unforeshadowed command about taking the Gospel out in to all the world. Dr. Winter retorts "as a matter of fact, the Bible actually begins with missions, maintains missions as it's central theme throughout, and then climaxes in Apocalypse with spontaneous outbursts of joy because the missionary mandate has been fulfilled!"
We shall discuss in chapter one about this mission which is based upon God's oath-bound promises to Abraham commonly known as the Abrahamic Covenant. Peter Cotterell sees the Christian mission as being charged with the task of giving meaning to life; of giving hope in a world of suffering and disorder. But more than that, Christian mission involves acting to oppose oppression, to bring wholeness and health, to announce Good news ; reconciliation with God, and the creation of the new community, the church, a community of love and compassion... and of power.
In particular cases, for instance, in the Asian context where pluralism - religious, cultural and ideological, poses to be a great hindrance. It is the concern of the Christian mission to demonstrate the universal relevance of the Gospel message. In such a case there arises a great need to recognize the problem that pluralism  addresses, but attempt to go back to the Bible with the context before us to spell out our apparent message so that we have to preach the uniqueness of Jesus Christ and the salvation he offered to all mankind in the realm of various claims of religions and the salvation they offer.

SEE WHAT THE LORD JESUS IS DOING IN FMC MULUND, INDIA.